In the past, Microsoft has been known for it’s flashy red, green, blue, yellow logo with curvy edges. That’s how it’s always been, from Windows NT to Windows 7.

A few days ago, Windows released on their blog what the logo for Windows 8 would look like:

Really? A few blue squares and Windows 8 in a typical boring sans-serif font.

Also, the little block of boring squares is trademarked.

If this is the direction Windows is headed, then I think I’m in business. Here, I present to you, what I believe the Windows 9 logo will look like:

Thanks to metro apps, Microsoft is moving away from multiple-window desktops. That’s why it’s not Windows plural – just Window. This will be followed by Window 10 featuring the removal of the text and the copying of apple’s Mac OS X:

Then, with Window 11, black will be out of style. That’s why they’ll switch to white.

And after that, I can’t tell. Transparent?

That’s where I think the Window(s) logo is going. Thoughts?

Less than a year ago, apple released OS X Lion. It added a ton of very very very handy features.

These are some shiny new features that are similar to the Leopard to Snow Leopard upgrade – not that big, but may still come in handy.

Mac OS X Mountain Lion is going to be released to the public this summer. In the meantime, you can download the Messages beta app and start iMessaging your friends from your mac.

Click here to see more of the sneak peek at Mountain Lion.

Android has always had a great browser built into it, but that browser was never Chrome.

Well, that’s about to change.

Today, Google has released a beta version of Chrome onto the Android Market… for Android 4.0 ICS phones. Luckily, thanks to my Galaxy Nexus, I get to try it out and give you this review.

First off after opening this app you’ll notice a pretty little googlicious introduction to the app. 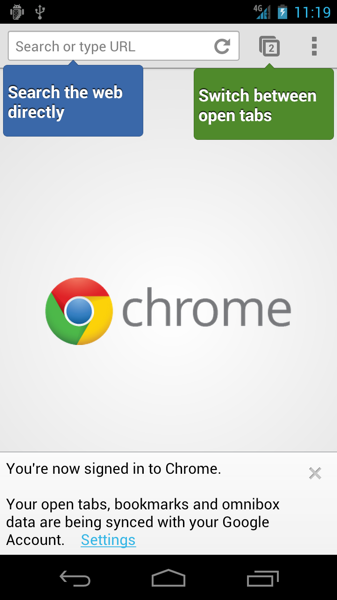 Quite simple, quite clean, quite google.

I’m going to warn you in advance – many of the features in the Chrome for Android application are identical to those that are available on the desktop version of the browser.

In my opinion, the tabbing interface has been improved from the tabbing of other mobile browsers. Instead of just a list of tiles, Chrome gives you a very pretty sorting-through-a-card-deck like interface. 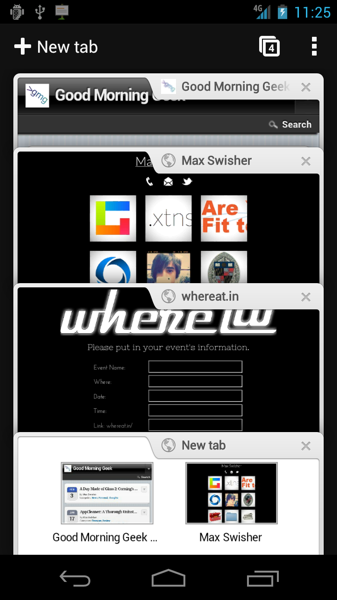 Don’t want a tab? Just slide it off to either side and it will make a spin-like motion into nothingness. These little effects add some very nice feel to the app. 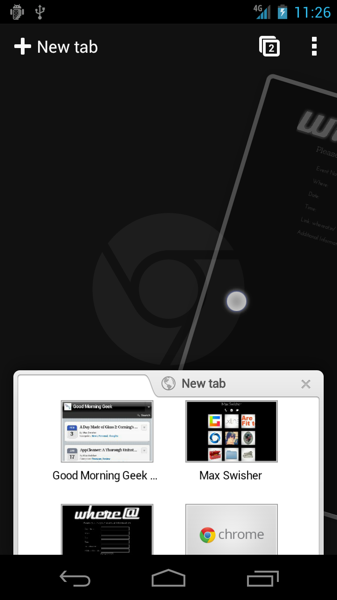 The other coolest feature of the Chrome for Android application would be its ability to sync with Google Chrome for Mac and Windows. If you’ve signed in to Chrome on your desktop (Wrench thing > Sign in to chrome…), then all of your bookmarks, history, and tabs are already synced up.

This means that you can easily retrieve them on the new tab page in Chrome for Android. This grants access to one, extremely awesome thing: live tabs. 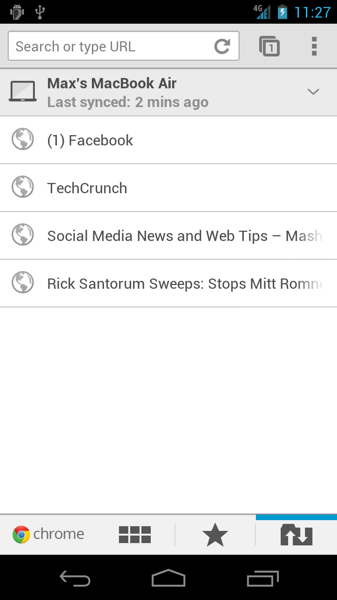 Pretty awesome, right? I must say, it’s not perfect – It takes a while for the tabs to get synced, and there isn’t an easy button to tell your computer and/or phone to sync. Remember though, this app is only in beta.

It’s the same deal with bookmarks – they will all get synced across your phone and computer(s).

If you use Chrome for Desktop on a daily basis, you already know the feel of the app. Google’s minimalistic style and code makes the app very light and quick to the touch. Pinch to zoom works fine, things render great, and the only thing missing is (of course) flash. But hey, who needs that anyways? We have HTML5!

In fact, lets compare. First, here is the html5test.com result for the built-in browser. 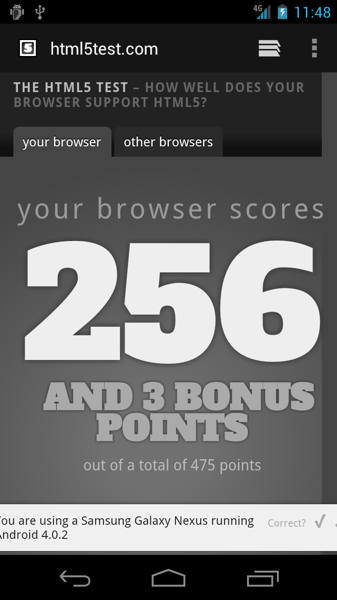 Not bad, actually – Firefox Mobile’s score is down the drain. 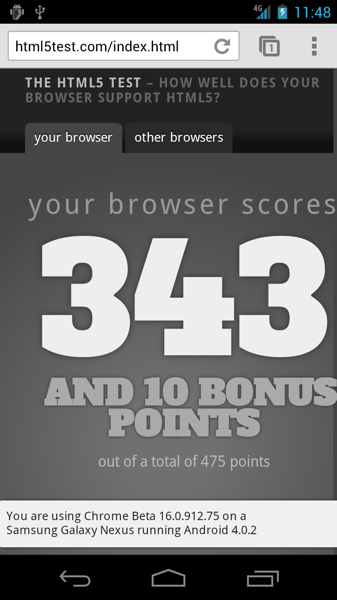 As I said, who needs flash anyways?!

Chrome Beta for Android is definitely a nice browser – if you have a device running Android 4.0 in the US, UK, Canada, France, Germany, Spain, Australia, Japan, Korea, Mexico, Argentina, or Brazil, it’s definitely something you should try out.

Otherwise, I don’t know when Chrome for Android will be released to the masses.

Link to Chrome Beta in the Android Market

Corning is a glass company that makes the now-infamous gorilla glass. Gorilla glass is thin, super-tough, and really pretty.

Corning is setting their hopes high in a recently released and trending video that features a super-future concept with crazy things like transparent tablets, interactive glass walls, and even tablets that project 3D holograms.

When would any of this actually happen? That’s a good question. If you find out, let me know.

And now, ladies and gentlefish, the moment you’ve been waiting for: