As you probably know, Google Glass was recently released to a select set of developers for testing. For those of you who don’t, however Google Glass is a pair of glasses that connects to the internet, has a build in webcam, and lets you talk to people and get directions.

This means a few things. First of all, you will soon be able to always have the internet readily available to you without even having to look away from what you’re doing. Secondly, the internet will become such an integral part of our daily lives that we will no longer remember what it was like without it.

Sound familiar? I don’t know if you’ve watched Wall-E, but here’s a basic synopsis: It’s way in the future, and earth was destroyed by the humans. The humans then made a giant space ship and lived on it. It was on this high tech spacecraft that everyone eventually got extremely fat by spending their lives in hover chairs. Every passenger also had a screen projected in front of them, and they were always so focused on what was on their screen that they completely neglected the outside world around them.

In fact, when two people bumped into each other and were forced to interact in real life, it was a new experience for them both.

Here’s just a simple overview of what google glass looks like to a wearer. Notice any similarities?

With Google Glass you can also send and receive messages, get directions, find information from Google Now, and even record video and capture your view through a camera – all available in your eye. Soon people will be walking around completely oblivious to the existence of a real world, and augmented reality will become the only reality.

Compare this scene from Wall•E with this demo of Google Glass:

As you can tell, we aren’t quite to the point of complete social isolation. However, the widespread availability of a product like this will bring mankind one giant step closer to the Wall•e-an dystopia that we fear. 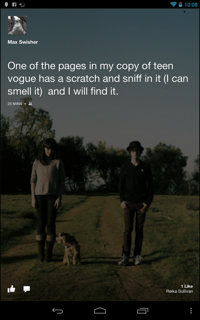 In case you missed the news, Facebook recently announced Facebook Home, a home screen replacement for android. In a nutshell, when you hit your Android device’s home button, it will bring you to a home screen where you can scroll through and interact with your friends’ posts.

Facebook announced that it would be available on the Google Play Store for a select few devices including the Galaxy SIII and HTC One X. But what about the rest of us?

Don’t fear! Where there’s a will there’s a way, and thankfully the guy with the will made the way easy enough for even the most basic of simpletons to accomplish.

Here’s how to get Facebook Home on any Android device.

First, open Settings on your android device and go to Security. Check the box that reads “Install applications from unknown sources.”

Second, go into Settings > Applications and find and uninstall any Facebook and Messenger app that you’ve already installed.

Now, go to this blog post on your Android device. To make it a little bit easier, just type in this short link: http://a.swsr.info/YouxEG

GMG TO ANDROID, DO YOU READ ME?! Good.

In your status bar, you should notice a little download icon. Install all three of the files that you just downloaded simply by clicking them and hitting install.

Next, look in your app drawer and you’ll find Facebook home. Open it and log in, and you’re done!

The success of this process has varied depending on your device, however I have it working wonderfully on my Nexus 7.

Credits to Modaco founder Paul O’Brien for this patch.

So Apple had some fun at the WWDC Keynote this year.

Siri did stand-up comedy to open. 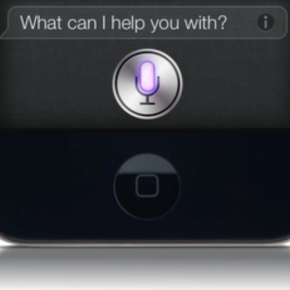 No really, I’m excited about the new Samsung. Not the phone, the refrigerator.

I must admit, that was pretty funny. 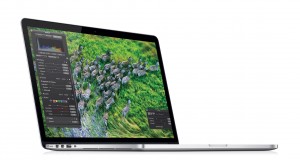 Apple also announced their next generation MagBook Pro, which is almost as thin as an Air, has a retina display, and a new Magsafe Port. Great.

All of these computers have gotten upgrades to USB 3, which is nice for those people who actually have devices that can take advantage of that.

Then, our friend iOS got an update.

Finally, iOS has turn by turn navigation. Siri is available on the new iPad, and has supposedly gotten a bit better. Facebook is now integrated as much as twitter. FaceTime is available on cellular networks. Photo streams can be shared. A new app called Passbook allows you to store tickets for planes, movies, and stores. There’s also a few other things that aren’t worth mentioning.

Mac OS X Mountain Lion didn’t get anything new from what we knew already, except thatdictation will be available in any text field. For many people, this will definitely come in handy.

Some people were unhappy with the absence of an iPhone 5. But I think we should be content with iOS 6, and expect the new iPhone this fall – along with the public release of iOS 6.

I’ve been playing around with iOS 6, and so far it works well. Siri works just as expected, and the Facebook and twitter integration is also very handy. 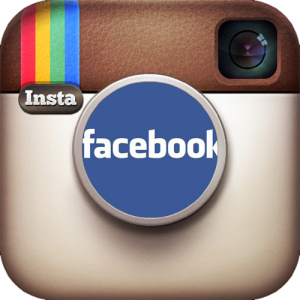 As you may know, they’ve been growing in size since their launch and Instagram has become an extremely large and popular service.

Because of this, it was inevitable that they would eventually be purchased by an extremely large company… and who better than facebook?

Second, a little note to Zuck and the whole facebook crew: Please, please, please, please don’t screw this up. Please don’t force it to be built in to the facebook interface. Don’t try to stick instagram into facebook, you’d be doing everybody a disservice. Also, don’t just get rid of the entire thing to eliminate competition.

We will have to see what Facebook is hoping to do with this photo-sharing giant, and I honestly hope that they don’t screw it up.

During a live facebook event that took place today, Mark Zuckerberg announced that Facebook has partnered with skype to provide one click video chatting to users.

It is referred to as a “mini skype client” by the CEO of Skype, and installs with a simple download of a java applet.

Zuckerberg claimed that there are no financial agreements with Skype, which is interesting to try and figure out who is benefiting from this. Skype CEO Tony Bates said that “We are planning to add paid skype over time as well.” This means that if you have a skype premium plan, you might be able to group video chat – but that’s just an assumption.

Speaking of group video chat, Facebook doesn’t have it! With Google Hangouts, Google’s chat service that allows up to 10 person video calling, may have an advantage over facebook. However, facebook has 750+ Million users – that’s a lot of people that are one click away from a video chat.

Video chat is available now to the public, just click here to get started.

RockMelt is an attempt at making a new browser.

Unfortunately, I am not very happy with the results.

The big thing with this is social integration. There are two sidebars on each side. One shows online facebook friends that you can chat with and the other has buttons that pop up a small feed of facebook, twitter, or any other RSS feed.

This would be great, however I find it bordering a little bit from web to desktop. I feel that when I want to have a desktop social app, I get a desktop social app. When I want a web browser, I get a web browser. And often, social (facebook in particular) tends to be online. That’s fine with me. But it seems like putting a wordpress editor inside of a web browser (which is why I don’t like Flock). It’s nice how you can chat with your friends out of the blue without having facebook open but this tends to be quite a distraction seeing who’s online and everything without even clicking a button.

Other than that, RockMelt seems like a complete rip on chrome. It was built on chromium which explains why, but I feel like they don’t need 30 employees to implement a few APIs.

Indeed, rockmelt is painfully slow. If your cache is empty, Good Morning Geek takes about 15 seconds to load the background.

Unfortunately, I give this browser a 2 out of five. It has a great execution, but I feel like the idea behind it is a little bit out of place.

RockMelt is only available in private beta (you need an invite), so unfortunately you can’t try it out. However look at the gallery for some screenshots. 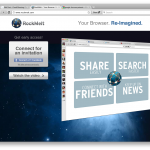 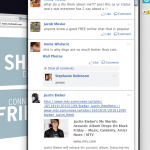 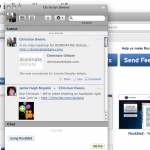 No matter what we all browse the web. That’s how you got here in the first place. And one of the most popular things to do while browsing the web is to share different web sites with other people over facebook, twitter, and even tumblr (in this case). And sometimes you will come across an article that you want to save to read a bit later. Cortex lets you do all of those, but extraordinarily quickly.

Cortex is a chrome extension, which gives it cross-platform flexibility along with a super easy installation.

Once you have installed cortex, you need to connect your accounts by clicking on the pretty circle on your menubar then clicking connect accounts.

Once you have accounts set up, it is time to start sharing.

To share a webpage it’s pretty simple: click and hold your mouse anywhere on the webpage. You should see something like this show up around your mouse:

Now when this shows up, keep your mouse held down and hover over which service you want to share the page with. Once you are on the letter/section, let go of your mouse and the link to the webpage will be instantly shared.

For facebook however it is a little bit more complicated.

When you hover over the f, another wheel will appear that has the profile pictures of the friends you selected up here.

Now, move your mouse over which friend you want to share it with, and now you can let go.

Although it may sound like it will take a long time, here’s proof otherwise:

I made that video when I was bored. 😛

To get cortexapp, you have to go to cortexapp.com and sign up for the beta then cross your fingers that you get an email back. 🙂

Many of us use Facebook, and have probably noticed that there is a chat function. Also, man of us use AIM in iChat. Personally, there are always more people on facebook than on AIM, so I can chat with a ot more people. Here’s how to integrate it with iChat so you don’t have to login to facebook every time you want to chat with someone or let someone else chat with you.

The Accounts preferences is shown here.

Now, just click the little + in the bottom left, and you are shown this screen.

For the Account Name, you need to find some info.

Now click done and wait. The new buddy window will appear, but it will say connecting. It may take a while for it to connect, and times may vary. for me it took about 45 seconds, others about 5. Whatever, but it still works!

After is connects, you will see all of your online facebook friends. Double-click a friend that has a green dot next to it and start chattin it up!