The developer mode of the apple application is very convenient, and easy to use. As you can see in the screenshot above, I can put dashboard widgets straight on to my desktop. They run there as if applications, but it really has one annoying problem- they always are on top of your apps.
To click something that is under a widget in developer mode, you have to move it first.
Also, it can be convenient for those with Mac OS X server who need to always be monitoring their stats while working. You can download the iStat Pro widget and put it on your desktop, and it will then look like this.

You may also notice that my Desktop picture is changing on every screenshot, and that is bcause have it set to rotate my desktop wallpaper every 1 minute.
You can also download many, many more widgets from apple.com, which you can also put on your desktop.
Of course with everything else on this site, to do this is easy and free. First, you have to download Deeper, which is an app where you can go into Deeper system preferences, including the dashboard. There, you will find a checkbox that says “Enable the Developer Mode of Dashboard”, as shown in the screenshot below.

Then, all you have to do to get a widget onto your desktop is click and drag a widget at the same time you are closing the Dashboard, and the idget you were dragging will not dissapear with the rest of the dashboard. you can then safely drop it on your desktop. you can click and drag it on your desktop to change its place, and you can click the i to change the preferences and do everything you could do with it as if it was in the dashboard.

I recently started to use Adium, which was yahoo, google, and everything else known to man. But I am always interested in all of Apple’s computer products, And iChat I had tried and was not satisfied. I have a yahoo, google, and facebook IMs, and iChat only worked with AIM. So I used Adium. Then I was looking at pictures of the OS X desktop, and I saw the iChat icon in the dock. So I gave iChat another chance. I opened iChat and put in my AIM, and I was like, Okay. This works. then, I saw what other accounts I could use. I saw a Google Chat account, and I put that in. It calls it the Jabber list because that is what it uses to connect the gmail with iChat. Then, I got an iChat account, and that was awesome. It is called an Apple ID, which apparently when browsing the Apple Store your checkout will already have the info from your Apple ID put into the info. it gives you a _@mac.com username, but sadly you cannot use that as an actual email address.  I haven’t met anyone with an iChat account, but when I do I think it will come in handy. Sadly it doesn’t work with Yahoo! IM, but most of the people I know that have yahoo IMs also have AIM IMs.

The UI is very nice, and I really like the chat interface. The buddy list interface is also nice. I like using it with the spaces function so I can assign it to all of my spaces so when I switch spaces my conversation will come with me. I don’t usually like to keep my buddy list open when switching spaces, so I can just press the X button or do a Command+H, and keep my chat windows open.
I think that iChat is a great IM application, and you can be reassured with compatibility with OS X because all macs come with it.
Use iChat if you have an AIM or Google account that you want to take care of chat capabilities.

Pre Script:Quicksilver is not to complicated but easy to use. also, in the screenshots of this page wallsaver is not enabled because it sucks up 2 things-

Battery life and RAM.
Spotlight is a very convenient tool. only with key commands, you can search applications, files, folders, web history, and much more. But some things you can’t do, like type in urls, or run scripts, or execute large text. Quicksilver is
pretty much a spolight, but you can execute urls. for example, here is typing in google.

To get to this text entry tool, just press the period key. it will look like this. this is after I had done the search for Financing. It automatically selects what ever you had come in the results of whatever you had typed in before pressing the period key.

Then you can do things like Large Type, and URLs. To open any item, just hit enter. it will do whatever the action is that is to the right to whatever is on the left. After Pressing the period key, I typed some stuff in. Here I typed in Apple is awesome!  and as you can see on the right it said Large Type (if all you see after Apple is awesome! is a square, it is actually an apple logo. if it is a square, you obviously have a PC).
Once you hit enter and execute it, the text will appear huge ( in this case “Large”, as Quicksilver says) accross you screen in white text. you can then hit the enter key or hit the escape key to exit large type.

Then when you hit enter, it will execute the Large Type. Once executed, it will do exactly that- Make it really big over your screen. 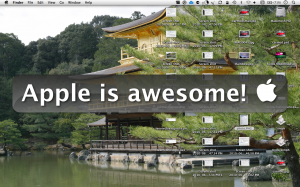 Wallsaver puts a screensaver as your desktop.
I use it all of the time, with my LotsaWater screensaver, which takes a screenshot of your screen and makes ripples over it. the only problem with using the screenshot feature with wallsaver is that when something moves on your dock with wallsaver enabled, Then the same thing of when you didn’t click on it will be there too. so thats wy I just used some image behind it. in this case, a cool apple spotlight picture. this one.

But to have wallsaver  use lotsawater is very hard. What you have to do is open the .saver file in system preferences, change it in system preferences to have the apple image under the options button, then it will actually modify the .saver file itself. then, you need to open the folder containing the .saver file in finder, at the same time as haveing wallsaver open then click and drag the file from the folder in finder to the wallsaver window. I enabled the aoutoactivte as well as the hide after activation, then on top of that had wallsaver open on startup, so the window would appear, then the wallsaver would activate, then the wallsaver window would disappear again. also, you can quit the application and the wallsaver wil still be in activation. also, after you sleep/close the lid of your mac it will still be activated when you open it back up, even without the wallsaver application running.
Here are the download locations.
LotsaWater:
Download Webpage
Wallsaver:
Download Webpage

I have been using skype for a very long while, in fact almost two years. One of my friends Sergey recommended it to me before I got my mac. We only got to see each other at orchestra practice, which was only once a week. He lives 30 minutes away, which is too long to have to drive. And phone calls? come on. $$$$$! Anyway, we are both on our computers most of the time. so I decided to get skype to talk to him. He had a webcam, which in the beginning I didn’t. But for free over the internet, we could talk and I could see him. Then I got a webcam. It was a creative webcam, Live! chat, which wasn’t bad, but not great either. Then, I wanted to get a better one and take a step up, so over amazon, I ordered a Logitech QuickCam Chat (I think) so we could now see and hear each other over the internet. All for free! The only problem was, he was nocturnal. I had the normal hours of sleep. So the only times we could see each other was late at night and about 9 when he had just woken up and I was about to go to sleep. But at least we could leave chats for each other with text, another cool feature. Then, my PC got all v!$T@d up (even though it had xp ;-)) and there were numerous reinstalls, grub problems, and things like not loading that stupid dang explorer.exe file. COME ON! I mean, on a mac, you are unable to delete the finder, and it will force startup at login. it’s like that app itself is its own operating system! If the Mac turns on and it shows the logo and the throbber, it is an VERY VERY VERY VERY VERY VERY VERY small chance that it will not boot finder. What happened to me was after I logged in on windows, All I got was a gray screen and a mouse. Reinstallation came next. Then I got my MacBook. SO EASY! I installed skype on it as well, and with the built in microphone and webcam, calling sergey on skype was so easy! I could move my macbook around! with my PC, even though it was a laptop, I always plugged it into a monitor, which was where the webcam was. So it was a pain to try to mobilize with that thing. also, skype JUST WORKS. If you pay for it, you can even use it to call people over landlines and cellphones, just like a normal cell rate! even worldwide calls! and it REALLY cheap. If you want to go for free, it has to be computer to computer over the internet. video is free, chat is free, everything is free if over the internet. You can make worldwide calls over the internet as well for free. Internet=FREEEEEEEE!

I recommend you download it, get a Skype Name, and Start giving it to all your friends! I have alot of friends who travel alot, and go on cruises but and do have internet, and this is how I can call them and SEE them when they are on the other side of the world!
Skype homepage
DOWNLOAD!!!!
Windows
Mac OS X
Ubuntu 7.04-8.04
Debian Etch
Xandros
Static
Dynamic
Static OSS
Fedora 7
Fedora Core 6
OpenSUSE 10+
Mandriva
Centos