We all wish we could have studio-reminiscent photos for our blog posts, etsy listings, ebay items, etc.

Here’s how to build an extremely functional lightbox using things that you probably already have around the house. I built this one out of stuff that I had laying around, so for you it might be as low as $0!

Instructions
1. Cut three holes in the cardboard box
Tape up the ends so you have the box, then cut out big windows on three of the sides of the box. Leave only about 1.5 inches from the edges of the window to the edges of the sides.
I wish I could have a picture for you, but I already built mine! You can look at the final picture at the end of this post and you’ll probably get an idea of where you need to cut.
2. Get out the paper

I had a huge roll of white paper laying around, and the thickness was just the same as my lightbox’s windows.

You’re going to want to cover two opposite sides of your box with paper, as the third you will be taking pictures through.
Take your paper and cut it so it is barely bigger than the windows you cut in your box, then tape them so they completely cover the two opposite windows.

Now it’s time to add the backdrop. I cut a strip of my roll of paper, but you might have to take some pieces of paper together – unfortunately that might mean that you have some pieces of tape in your photos.

Take the paper and tape one end to the back top edge of your box. Push the paper inside the box so you get a nice, smooth curve at the back bottom edge.

The front window still has an edge at the bottom, which will probably get in the way of your shooting. Cut that little edge off so the front window is open.

Now, you just need to add some light. I have some photography modeling lamps around, so i propped those up and put them on each side. In addition, I got a desk lamp for each side and put in 100w bulbs. For the final touch, I put a light right in front so that the front was filled in as well.

You’ll probably want to set your camera on manual, then put it in a tripod. I’m using as wide as an aperture as possible, as low as an ISO as possible, and change the shutter speed so that you get the right light. 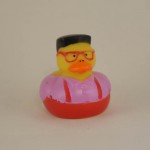 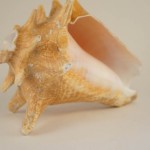 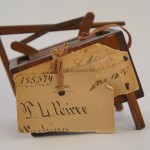 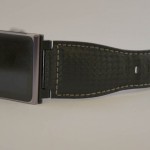 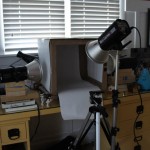 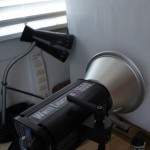 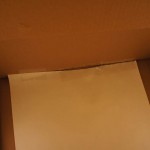 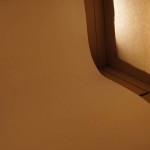 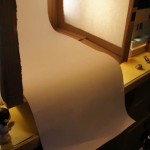 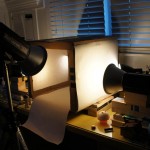