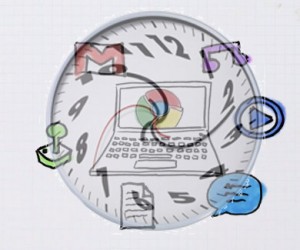 So everyone is talking about how all of our normal applications are transferring to the internet; the cloud. But if you haven’t noticed, people are still buying powerhouses and desktops and the netbook business ain’t doin so hot. The iPad is selling like hotcakes but think about it: it’s not completely web-based, you can download games and things. Why isn’t the world using just the web for everything?

Because people in the world have more to do than just email and flash games and facebook and spreadsheets. The web isn’t powerful enough. Google Docs can’t do quite as much as iWork or even Microsoft Office. Because it isn’t as powerful. And we can only diagnose this if we dig down a little technically deeper.

When we are using a web-app, for example, google docs, not everything takes place on the web. The potential is actually downloaded to your computer and then executed in this tiny little cache. The processor isn’t web-based. You are just keeping the stuff up there. And this tiny little cache where the web-app is downloaded is just too small for anything more than a very lite application. If we were going to use a full featured but “web-based” Microsoft Word, it would take 10 minutes and 2 GB of a cache to download. The web isn’t fast enough to support powerful applications. What about the video editors out there. What about the photo editors out there. As amazing as it seems, The web doesn’t have enough power bandwidth to do advanced things such as video rendering.. That’s the reason that there is no online version of Final Cut. Developers can’t make their applications to rich because they are limited by the capabilities of the web-browser, download speed, and cache. But what do we get if we eliminate these barriers? We get a desktop application. What i’m trying to say is that Desktop applications are virtually unlimited. . Lets say I’m in a taxi and I just remembered that I had to do a presentation in a few hours. If I have a computer running ANYTHING OTHER THAN chrome OS, then I can open up my handy dandy presentation creation application and whip up a quick and easy slideshow. But if I’m web-based, then there is the variable of internet access. A netbook running chrome OS is completely useless if you are in a plane (unless of course the plane has WiFi).

So when google is trying to launch their Chrome OS, keep in mind why you are getting this computer/netbook. For some people, it may be fine. Maybe they just want to have a simple lite computer to use when in a meeting. But remember, if you opt for this the web is your only option, therefore you are limited in power, features, and accessibility.