I have a bit of a thing for vintage stuff. Typewriters, film cameras, vinyl records, I like these old everyday items. Here’s why: 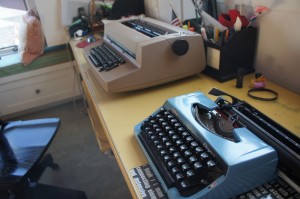 Typewriters are nice mostly because there’s no printing. You press the key, the letter appears. You’re done. That’s it. Also, they often don’t require electricity, meaning you don’t have to worry about running out of battery juice. And even if you have an electric typewriter and it loses power, your work is not going to disappear. After all, typewriters have letter-by-letter autosave! How hi-tech!

Also, typewriters are very palpable and mechanical. You touch something which directly affects something else and causes someting else to happen which eventually stamps a letter onto paper. It’s a direct, tangible connection to what you do and what happens. 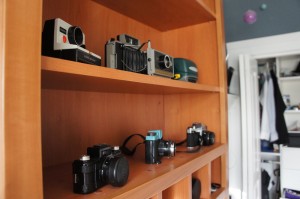 Film cameras are fun partially because of the surprise aspect. You never really know how the final product will turn out until you develop the film. In addition, you never run out of battery – one roll of film and you’re good for 24 (or 36) shots, whether they’re taken all in one second or all in one year.

Another little benefit to film is that the resolution is very high, and is usually dependet on the highest possible resolution of your scanner. A square inch of film has way more silver hallide crystals on it than a camera’s sensor.

In addition, vinyl records are touchable, tangible, existing things. You can actually hold the music itself, as opposed to some imaginary sequence of 101010101010101011000 (binary).

The other thing that all of them have in common is their direct palpability. No electrical signals, 101001010110001111, encodings, or digitization; nothing but direct, easy-to-understand cause and effect.

I understand that many may disagree with me, and I would love to hear about that in the comments below.

side-note: feel free to check out my new personal blog http://swsr.me, and follow me on twitter/instagram: @maxswisher on twitter, @maxswisher on instagram). Also, if you enjoy my writing, please please PLEASE make a small donation towards the cause!