The date is April third. 7:00 AM. Where’s am I? Of Course, at the Apple Store. There are about fifteen people in front of me, and one behind. The black screen is up, hiding everything in the apple store.

One hour and a half later, across the street from the store is the local high school jazz band warming up for some reason. There are now 20 people behind me.

Ten minutes later (8:40) there are about 80 people behind me. There are hands over the black screen and everybody in the apple store is coating down a from ten. Once at zero, the screen is dropped and the iPad signs are all up in the apple store.

Five minutes later the apple store employees are running down the line and giving high-fives.

Five minutes later the doors open and the local high school band starts to play. The first twenty or so people are let in going through a line of apple employees giving you high-fives. I am then greeted by the manager (who I happened to know) and we pick what we want: a 32GB iPad, an iPad case, an iPad dock, and some headphones. We check out and at the bottom of the post there is a picture I got.

I get home and unbox the thing. I sync and start exploring. I download some apps, hookup email and everything.

I put on the case and started playing some games.

Then, I open the word press app and I write this post.

There you go, the iPad experience. I caught most of it on HD video, which I will put up very soon.

There will be reviews of every aspect up over the next few weeks. 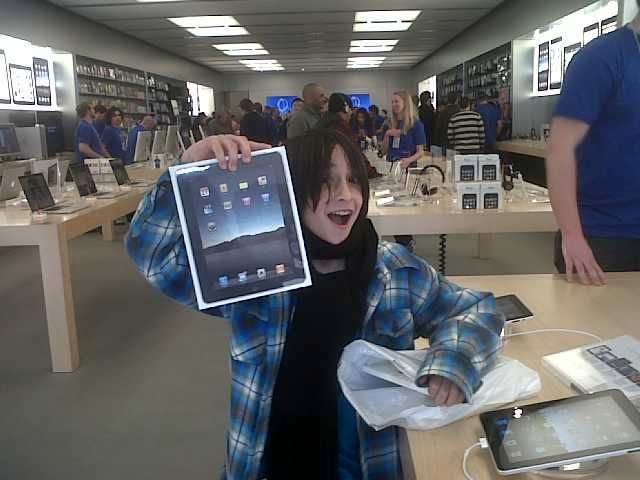 One thought on “The iPad experience”