My last post was about the new iPad announcement. I was able to get my hands on one, and here’s what I think.

The biggest deal about the entire new iPad is the retina display. When it was shown on the iPhone, it was kinda crazy. Whow, I actually *can’t* see the pixels! Seriously!

For those who don’t know, here’s a description of the retina display:

Displays work with pixels, each one having RGB units (sometimes called “sub-pixels”). A 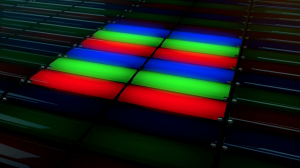 combination of the colors red, green, and blue can make up any visible color.

All of these pixels are squished next to each other and light up at different times to make different colors. This gives us our shapes, colors, and pictures.

Each display has a rating of the density of the pixels, which is how many pixels are crammed in each inch. Many displays are 72, some 100, and a variety in between.

The whole deal about the “retina” display is that the DPI is so high, and the pixels are so small, that you can’t pick out any of the pixels. That way everything is sharper and less distorted.

The DPI of the new iPad’s retina display is 264 DPI. Compare that to a printer at 300, and you’re damn close.

Now, the total resolution of the iPad is about 3 million pixels. Hint: that’s a lot. As you may have seen in one of their promotional videos, Apple had to separate the pixels from the layer of signals that tells each sub-pixel when to light up. That way, signals don’t get crossed and what not.

Simplified: the retina display is very sharp and very pretty.

As you (hopefully) read in the last paragraph, there are 3 million pixels that need to be lit up and controlled by the graphics card. That means that the card needs to be nimble and powerful. So, there’s the A5X chip. Honestly it’s hard to notice a difference unless you’re playing games with a lot of 3D rendering and action (A.K.A. Infinity Blade).

The one thing that really just sucked about the iPad 2 is the back camera. Its megapixels were at near-flip-phone levels (critical). Thankfully, Apple stuck in the 5MP chip from the iPhone 4 and the optics from the iPhone 4S, and voila, we have a less awful camera.

The front camera is still the same (not great), but hey, it’s okay for impromptu self-portraits, video chat, and using as a mirror.

At long last, we have a 4G Apple device! Fanboys unite!

Yeah, the title basically says it. The new iPad has an antenna that supports both AT&T and Verizon’s 4G LTE networks.

I had to set up a Verizon 4G iPad and it was NOT easy. Verizon insists that you create a new account, and they have no option to login and add the iPad to your existing account. Instead, I called Verizon customer service, was redirected to a different customer service line, and after giving the guy a ton of numbers and passwords and who knows what, I was finally able to get 3G on the thing.

AT&T was different; They had an “Already have an account? Tap here to login” link.

Overall, the new iPad brings about some changes that are simple, yet long awaited. The physical profile is still the exact same, and the only complaint that I (and many others) have had is the temperature. The iPad seems to run at hand warming temperatures, which is great when you’re in an isolated log cabin in canada, but not so great when you’re in a standard thermally regulated room and start worrying if your precious device is going to melt. At the moment, that’s the only major complaint, to which Apple has responded that the iPad “runs well within it’s operating temperatues.” Well, if you say so.

Another small thing that we got with the iPad is Dictation. Hit the microphone button and talk, and you can input text anywhere using only your voice. This is a sad excuse for not adding in Siri, considering that Apple could have easily done it had they wanted to. Siri or no Siri, the new iPad is definitely a step up from the last, but we’re still waiting for the giant evolution (3Gs to 4 evolution). 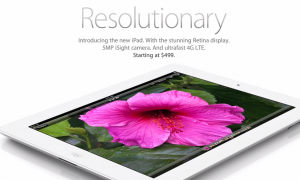 Apple has (finally) released the newest iPad. Unlike speculations, the iPad has dropped it’s following number and is simply being referred to as the new iPad.

iLife has also been added to the iPad – GarageBand and iMovie have already been released, and joining them is the iPadular version of iPhoto.

The new iPad also features a new A5X graphics card, which is necessary to power the 3.1 million pixels in its high resolution display.

Other than a few new other software features, the iPad remains the same. It has the same outer shell as the iPad two, and has the same pricing regimen as well.

The new iPad will be available on March 16th, which is a short 9 days from its launch date.

I will get my hands on one then, although I doubt that I will end up owning one – my MacBook air completely gets rid of the need/use of the iPad, as it has an identical form factor with a much larger array of features.

Recently, Google added Movies, Music, and Books to the Market. Thanks to the general nature of the word Market, no name change was necessary.

All of your music showed up in the separate Google Music app. Your movies in the Google Movies app. Simple enough, right?

Honestly, it’s nice that they’re congregating all of their purchases under one name, however “Google Play Movies” sounds like someone with awful grammar trying to say Google Plays Movies. I think they just need a semicolon – Google Play: Movies… actually, no. They just should have gone with something other than Play.

The new logo and name are all that has changed – the general interfaces are still identical, so nobody needs to freak over yet another interface change. However, it’s still a bit annoying that Google decided to mix everything up – all at once – and will probably manage to confuse a lot of people in the process.