You may remember Google Buzz, the Gmail integrated failure of a social network. From the get-go it was obvious that it would fail – mainly because it was so dependent on Gmail.

But Google is back – and this time they’ve got something new called Google+.

You probably expect google+ to fail like Buzz. But there are two things that might get people to switch over, which ultimately means facebook’s downfall.

But what if you only want to share some things with Family, somethings with College buddies, and absolutely nothing with your business friends?

You can add people to different circles – a circle for friends, a circle for family, and you can have lots of circles with whatever names you want.

When it comes to sharing, it’s just as simple. Click the “Share” button and you will see an empty box, with selections to share a picture, a link, a place, etc. Once you’ve crafted your wonderful post, you can then select which circles you want it to be viewable to. This means that only the people in that circle will be able to see it, and nobody else. Of course, you can share with more than one circle, one person at a time, with all of your circles, and publicly. It also makes it easy to share absolutely nothing with your boss!

The other thing that may determine the success of Google+ is something that hasn’t been added yet – an API. An API is an interface that developers can put in their apps to integrate with different services. An API is what allows Twitter to have so many apps that post to it. And if there’s no way to post to Google+ other than the official website or app, nobody is going to want to switch. After all, we all want to boast our high scores from useless iPhone apps to all of our friends, right? Without an API Google+ isn’t going to get far.

A couple of other features…

Google+ is a great social network, and all it needs to become better than facebook is an API.

As far as features go, Sparks and Hangouts are two things I didn’t mention.

Sparks is a way to follow your interests. I can have a Technology spark, an Android spark, a Cooking spark, etc. I don’t find them very useful – all it does is aggregate posts that are relevant to whatever keyword you put in.

Then, there’s Hangouts. This is a multi-person video chat that is executed very well. (P.S. the below photo was taken of/by Greg Sterling) 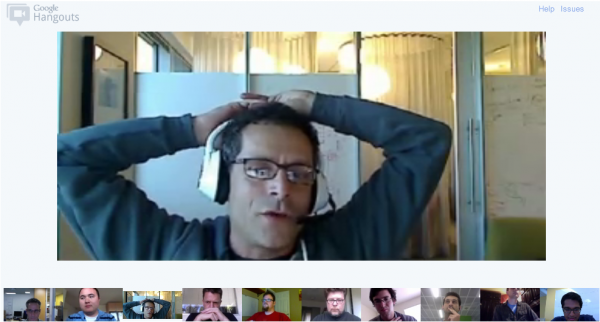 Yes, it works as well as it looks.

But not everybody will find these features useful enough to want to switch over from facebook, which is why I think that Circles is the real big thing with Google+.

Google+ is only available by invite at the moment, but should be released to the public soon.