You may know about the long lasting line of Google’s special Google Phone called the Nexus. There was originally the Nexus One, then the Nexus S recently. Both of these were manufactured by Samsung, but Samsung’s name wasn’t really placed on it – just on the very bottom of the product pages.

But Samsung has taken a different approach this time – They’ve released a new Nexus phone that they are calling the Galaxy Nexus, following their popular like of Galaxy S phones.

Other than the new name, the Galaxy Nexus follows Google’s standard path of some great upgrades.

As far as hardware goes, it’s just like the Nexus S – but better. The Galaxy Nexus features a slimmer body, more vibrant screen, and a very nice camera – although specific megapixels are not supplied.

But the real upgrades are in the software. The Galaxy Nexus features the purest of pure Android 4.0 – which is a nice relief considering all other phones in the Galaxy S line are skinned by Samsung, causing them to be painfully slow and unresponsive. 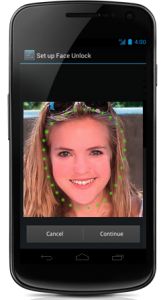 Among Android 4.0’s new features (other than the painfully idiotic name of “Ice Cream Sandwich”) are Face Unlock, which allows you to unlock your phone with face recognition; Android Beam, which uses NFC to send websites, photos, contacts, and more to other phones; and your usual fixing of extra eye candy.

The Galaxy Nexus doesn’t have any pricing or supported networks, however a bit is given away with the following line:

Verizon is the only provider that currently has an LTE network, which means that the Galaxy Nexus will be on Verizon for the first time.

I’m definitely excited for this phone, and anyone in the Android market should definitely look at this phone.