I was lucky enough to yes, have an hour and a half of time with Phil McKinney.

Don’t know who he is?

We talked about multiple things:
Innovation, what people want, and what happens at the HP labs. I learned a couple of cool things. During that conversation.

The innovation thing stuck with me.

I asked him if the level of innovation was the same at an elephant like HP as it was at a startup (which I found out he had run a couple of those). His answer was basically that at a giant, good ideas have more funding and therefore have more flexibility. The downside however is that it runs very slowly. Another thing that I learned about this by listening to his podcast (Creating Killer Innovations) is that at a larger company, you get a bunch of people together to brainstorm ideas, and someone writes them all down. After, they email it to everybody and what happens next? Nothing.

At a startup though, it’s different. They don’t have as much flexibility due to funding, but they can roll things out pretty fast because there are usually less people for the ideas to run through. Personally, I work at a startup Cooliris (cooliris.com) and I create ideas. I use gopogle docs to document them and it is shared with the CEO and the QA assurance. There see only a few engineers so it could be handed right to them in the office. Within a couple of months, those ideas are probably in the software.

I also learned that being the CTO is more than just about coding. You have to integrate the technology into everything else and find new ideas for products. Knowing how to code is handy, but knowing marketing and EVERYTHING else is also very important.

Another cool fact: The LED was invented at HP, and whenever someone uses them HP gets royalty. ironic, because my iPad and MacBook both use LED backlighting. LOL!

Also, one of his duties is to figure out what people want in a product. He told me about these best buy studies he does. He goes to a best buy and watches people and listens to their conversations while they are looking for a monitor or a computer to get (Id be a little creeped out, personally). When his “subject” finally goes to check out, he goes over to them, hands them his business cards, and asks them to go through his browsing process to see why he eventually purchased that product. I still find this a bit creepy, but hey, it’s for a good cause!

Another thing I asked him about was if I should learn any coding.

Yes, I don’t know how to code.

I’ve asked many people this question before, and what I usually get is that I should start with Java.

Phil had another idea. he recommended that I stared with HTML5, because that’s where everybody is moving to: The web. I know a tiny bit of HTML, which will help me in learning this. Also, if you have any recommendations for an HTML 5 book, all are welcome in the comments section!

Along with that, Tony Welch (or Richard Welch or Frosty Welch, whichever you choose) took me around a couple of floors in the building. I saw their equivalent to telepresence (which I was quite jealous of at first sight), and I saw some other cool stuff that I don’t think I should tell you about juuust yet (sadly, there were no slates :’-[ )…

Along with that, Tony showed me the Blackbird, which was made by VooDoo (which was recently acquired from HP). That thing is quite the computer, with liquid cooling and the whole chutzpah. he also gave me quite a nice handful of VooDoo schwag (free stuff) including a VooDoo Edition Razer Tarantula keyboard, three Blackbird USB keys (two of which I RAIDed, blog post on that coming soon!), a Blackbird T-shirt (like all other t-shirts i’ve gotten from companies 3 or so sizes too big), and a few VooDoo temporary tattoos (“CAUTION: may deliver a bad-ass appearance temporarily” was on the packages…). Expect a review on that keyboard soon!

I was walking to my car and Phil gave me his creating killer innovations CD. Thanks Phil!

Just wanted to thank all of you HP people including Tony, Ann Finnie (Phil’s PR gal), and of course, Phil. Had lots o fun! Here’s a picture: 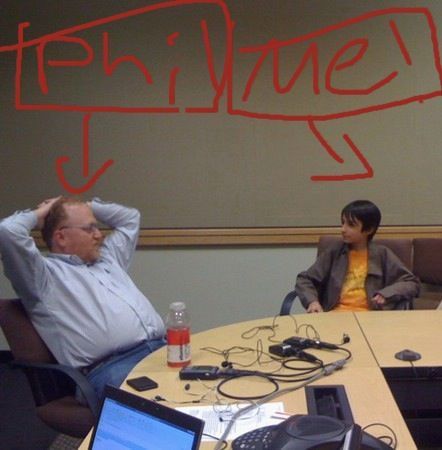 Do you own a computer? Does it run something other than MS-DOS or another code based system?

Then you have a desktop. The desktop is supposed to be what it is… a desktop. But desktops arent flat. Desktops have depth. You can put stuff on top of other stuff to sort it, you haave sticky notes…Turn your desktop into a desktop with BumpTop.

But open the BumpTop application and turn your desktop into a desktop!

As you can see, BumpTop changes my desktop into a true desktop, giving it a room kind of feel.

That’s truly the whole point of BumpTop. It really Goes even farther than that b y allowing you to make files bigger or smaller, depending on their importance. To do this, just click on an item once to select it, hover over the selected item, and click either grow or shrink. If you get the pro version, this can simply by done with the pinch of your fingers (only with a multi-touch trackpad). I would show you a screenshot of this, but when modifier keys to press for the screenshot make the small box with the options disappear.

Want something to be on a wall? Just click and drag it there. Pretty simple. Want to see one of the three available walls? Just double click it. Still on a wall you can make things bigger or smaller.

One of my favorite features is called piles.

Just select a few items (A great new kind of selecting tool, as squares are just too hard to use), hover over one, and a menu will appear; you can click clean up to make the files into a neat grid, you can grow or shrink the multiple selected items, but there is another option:Make Pile. This will put all of the files into a neat little pile, which you can select, press “Return” and name the Pile. You can also make the pile bigger or smaller. Due to the basics of physics, you can’t have a pile on the wall. Yet do you want to see what’s in a pile?

Luckily, BumpTop integrates almost perfectly with QuickLook. You can select a pile and press spacebar to see the QuickLook of the files inside like you had selected all of the items. To open a file in the pile, you can double-click the file which will popup a little box with all of the files of the pile in it. Click a file to open it. Piles is really convenient for organizing things other than using folders.

Try taking a file and setting it kind of to the side but on top of a pile. This works with the sticky notes (you can click the new note button to create one, and move it around like a file), which is what is shown below:

This can be done with all files on your desktop.

o just an FYI, If you want to change the backgrounds of the walls and floor, that can be configured in the preferences located in the menubar icon.

Overall, BumpTop is a great cross-platform way to expand your desktop 3X, and give you a great fun experience.

You CAN in fact get the pro version with a few more features, but If you are looking for an AWESOME and FREE way t have some fun with your desktop, it’s called BumpTop