There may be times in your life where you need to make a mathematical figure or equation on your computer.

For me, as a high school student, this occurs often in both math and biology. There is no easy way to create a fraction that looks nice in word. Most people use awkward line spacing and tabulation to make fractions, but isn’t there an easier way?

Start out by going to The Codecogs Equation Editor.

Up above you’ll notice a giant bank of mathematical symbols and templates.

Click one of these and you’ll get some markup in the text box with some empty brackets. Stick some numbers in the brackets and see what happens below the box. 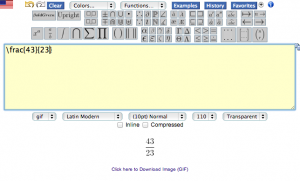 Look at that, you’ve created a mathematical figure!

To extend your equation, just keep adding symbols and they’ll fill from left to right. You can also nest these items within each other, so you can have a fraction within a fraction, a number with an exponent within another symbol, and so on. 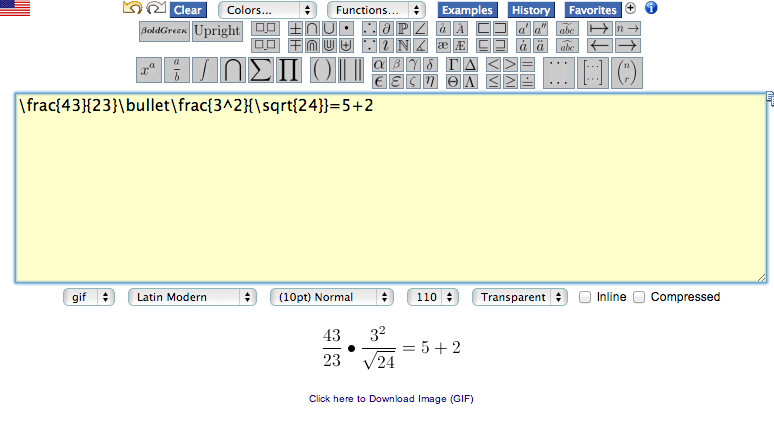 Using this, I bet most of you will be able to figure out how to write some great and useful equations just by playing around with it.

Once you’re satisfied with your equation, you can click the “Click here to Download Image (GIF)” link and a GIF of your equation will be downloaded. It won’t be very high resolution, but if it’s resolution you want I recommend copying your completed LaTeX markup from the Codecogs editing website and pasting it into Roger’s Online Equation Editor. Here you can put in a giant resolution and download an image in some other format. 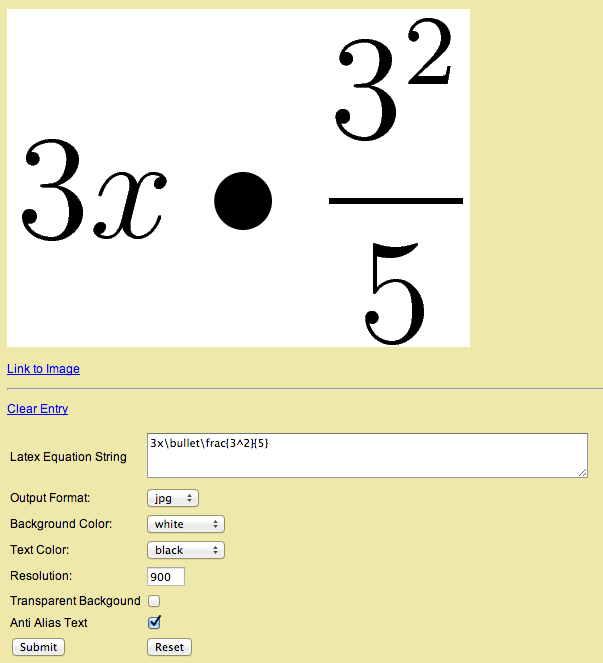 Another use I’ve found for LaTeX is in my high school chemistry class. As we discuss radioactive decay, it is necessary to notate isotopes and decay equations on a computer. Luckily, LaTeX is here to save the day.

Lets say that you have an Iodine-131 atom on the left which decays into a Xenon-131 atom and a beta particle. This can be notated in LaTeX with

You can probably figure out what all of those things relate to in the result:

So there’s your primer on the basics of LaTeX. Enjoy!